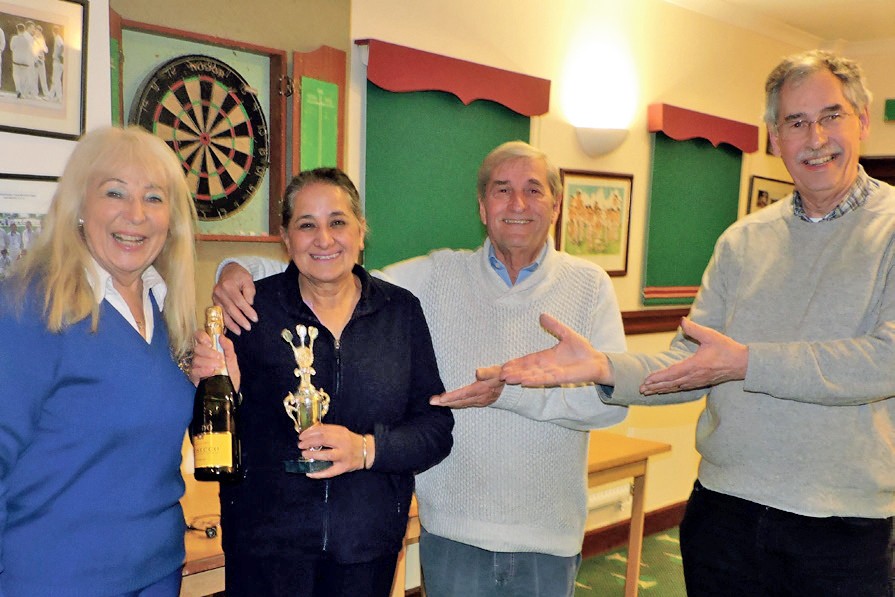 Banbury Rotary put a lot of effort into raising money for, and helping out in, the community – but they also have a lot of fun!

January saw the Darts Event at Banbury Cricket Club.
Breathtaking action from President Surinder seeking to hit the board saw everyone run for cover!
In the final, Rotarian Helen Morris beat Harry Matthews winning the darts trophy for the second year in a row!

Thanks to Rotarian Nigel Yeadon for doing a brilliant job organising the event including a fish and chip supper for everyone!

There was no club meeting on Good Friday but on Saturday 20th a group of members went to the Cotswold Distillery for a very enjoyable visit and tour – many thanks to Nigel Yeadon for arranging the trip. 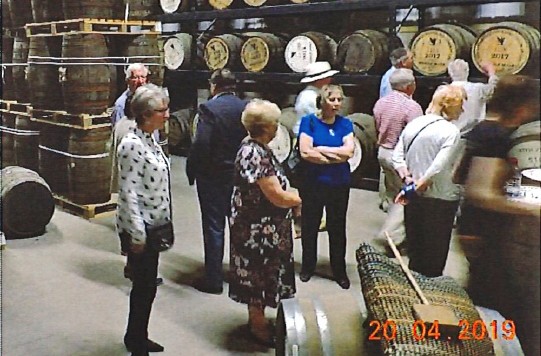 A number of us had fun today on a Treasure Hunt starting in Bloxham and finishing at the Masons Arms for a pleasant Sunday Lunch where any who had become lost could regain their dignity. The winner naturally was the President’s car which did have the advantage of having a four member International team from Brazil (Gabi), Wales (Peter) and even jolly old England (Ian & Pat). 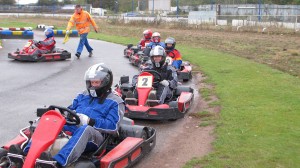 Twelve want to be Rotarian F1 drivers went Karting@Oxford on Wednesday. After the briefing and 4 warm up laps the group was split into two teams for 25 lap races. The fastest 6 and the more sedate 6 then raced off against each other for another 25 laps!!

With a damp track, there were plenty of spins and a few bumps but we all had a thoroughly exciting and enjoyable time. The winner was Johnny (Herbert) Webb, second Nigel (Mansell) Yeadon and a close third Malcolm (no F1 names come to mind) Douglas.

Thanks to Andy and his team @OxfordKarting for a good time and Bob Thompson for organising the day.

International Fellowship in Banbury Town Hall:
Thursday 29th May saw the arrival of 58 Rotarians from France, Germany, Italy and Switzerland, all ready to enjoy (we hoped!) a weekend of fellowship and entertainment – the culmination of 10 month’s planning by the Banbury Contact Committee. 22 visitors to be hosted in Rotarian’s homes and the rest cosseted in the Banbury House Hotel.
Our guests were collected from a wide variety of locations, either by coach or volunteer drivers in their own cars, the whole operation masterminded by Phil Cavill. After registration and a reception at the hotel, it was great to see so many people enthusiastically meet up with old friends.
Arrangements had been made for hosts to entertain their guests that evening at a variety of hostelries around the Banbury area.
On Friday we congregated at the Rugby Club car park to be collected by two coaches, which transported us to our first venue, Compton Verney.
On arrival coffee was served in the Adam Room and we were given a brief history of the development of Compton Verney. We were then free to roam around the gallery to view their impressive display of artworks, as well as this season’s special exhibition of sculptures by Henry Moore and Rodan.
At 1 o’clock we returned to the Adam Room for an excellent lunch, after which we returned to the coaches and departed for Stratford upon Avon.
We had arranged tours of the recently redeveloped Royal Shakespeare Company theatre. Our guides took us round the building, explaining some of the history and indicating the structural changes which had been made. We were also able to view the new stage of the main theatre as well as the auditorium of the Swan. As the tours had to be split into two groups there was free time to enable our visitors to explore some of the sites in Stratford.
At 6 o’clock we boarded the coaches again, to be deposited at Banbury Town Hall where, after a drinks reception, we enjoyed a meal and were royally entertained by the Susan Taylor Dancing Academy, Graham Anker and his magical friends and the talented students of the Sibford School House Band.
After a leisurely breakfast on Saturday morning, we assembled at Broughton Grange around 10 o’clock for an introduction to the fantastic gardens by the head gardener Andrew.
We were then free to explore the extensive grounds and rounded the morning off with copious cups of coffee on demand.
With lunch time fast approaching, we drove the short distance to the Wroxton House Hotel for pre- meal drinks and an excellent lunch, served under the eagle eye of Rotarian John Smith.
The proposed visit to Banbury Cricket Club to educate our guests on the finer points of the national game was rained off, so the afternoon was free for site seeing around Banbury and district, or to relax.
At 6.15 p.m., the coaches were summoned to transport us to Heythrop Park, where, after yet another drinks reception, this time taken on the terrace in bright sunshine, we retired to the Enstone Suite.
There President John welcomed the guests and the President elect of the Aalen-Heidenheim Club invited us to join them for next year’s Contact gathering in Germany.
Speeches over, we sat down to dinner and then danced the night away – well, till midnight. Our “Barkers Carriages” delivered around 100 tired but seemingly happy Rotarians back to Banbury and bed.
The official programme having been completed, Sunday morning was spent socialising with our guests and bidding them farewell as they started their journey home.
We have received some really good feedback from the visiting clubs and it seemed to me that friendships and acquaintances made on previous Contacts had been strengthened and expanded. If you hosted or joined us at some of the events we organised, thank you for your support. If you couldn’t make it this time, give it some thought for the future – it’s a great event.
John Bennett 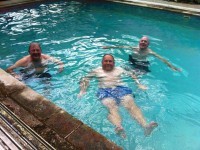 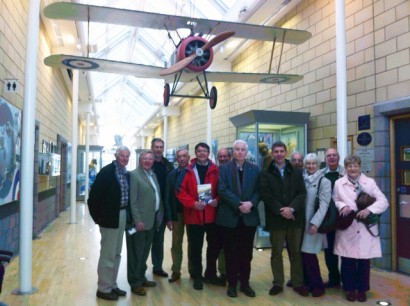 The Club Outing on 22nd April was attended by 13 members and partners. It was superbly organised by Nigel Yeadon and our thanks go to the Sports & Entertainment Committee for arranging a very interesting day.

RAF Cosford, along with Hendon, are the keepers of the country’s aviation heritage and the history and traditions of the Royal air Force. Housed in four buildings, Hangar 1 covers Transport & Training Aircraft and the Engine Collection. Our own qualified pilot, Ian Anthistle, gave a very knowledgable explanation of the workings of a jet engine in language even I could understand.

Building two focused on the Cold War with a display of 3 nuclear bombers, the Valiant, Vulcan & Victor and the Missile Collection. There was a great exhibit of how post 2nd World war Europe, the Berlin Blockade and the Iron Curtain affected relations between East & West.

Refreshed by lunch it was good to see and read about the Warplanes housed in building three, Spitfire, Hurricane, Messerschmitt & Mitsubishi fighters and a collection of bombers including an Avro Lincoln and De Havilland Mosquito.

Building Four had a great collection of test flight aircraft including the infamous TSR2 and the HS Harrier Jump Jet. For the brave there was a flight simulator and 4D Dog Fight Experience and an interactive centre.

An excellent visit, Nigel will be keeping up the high standards in the next Rotary year, so do make the effort to come along.

Nothing has been posted here yet!

Sorry but nothing has been posted in this category yet.