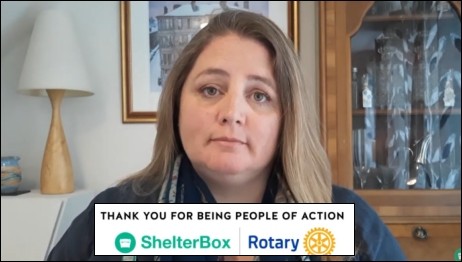 Thanks to everyone who has contributed to the ShelterBox project. 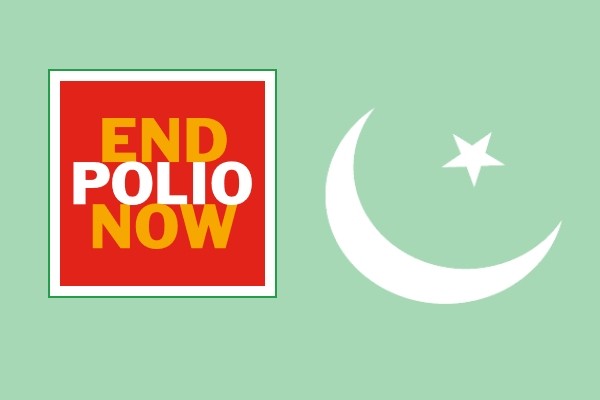 The proceeds of many of Banbury Rotary fund-raising events includes a contribution towards the phenomenally successful End Polio Now campaign.

Only Afghanistan and Pakistan still continue to report cases of wild poliovirus, the remaining challenges to global eradication – amongst which the difficulty reaching children amid insecurity and conflict and weak health systems – have proven to be the most difficult.

In a final push to eradicate the disease for everyone and forever,  a delegation of Rotary International leaders from around the world traveled to Pakistan this week to meet with government leaders including Prime Minister Imran Khan, Minister of Health Dr. Zafar Mirza, Army Chief of Staff General Qamar Javed Bajwa and Dr. Rana Safdar, head of Pakistan’s Polio National Emergency Operations Centre.

Our efforts are further buoyed by the news, on 22 January, that the Bill & Melinda Gates Foundation would extend their long-term fundraising partnership, which generates up to $150 million annually for polio eradication. Under the agreement, Rotary commits to raising $50 million a year over the next three years, and each dollar will be matched with an additional two dollars by the Gates Foundation.
This expanded agreement will yield up to $450 million to hopefully complete the process of polio eradication from planet Earth. 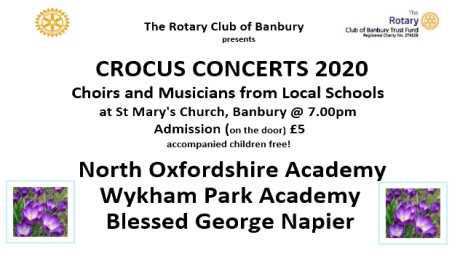 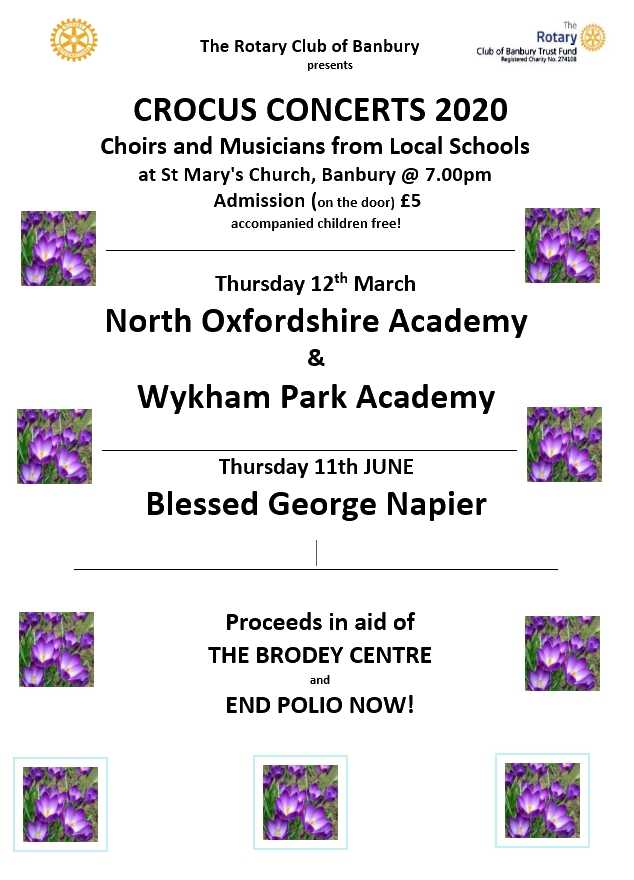 Charities benefit from “Six of the Best” concert – Dec 2019 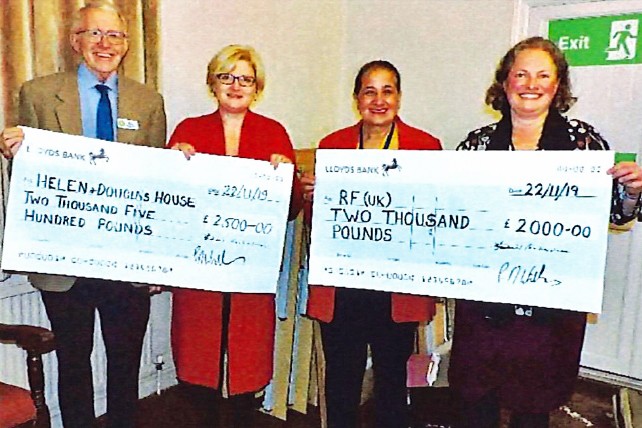 On Friday 22nd November cheques for the profits from the ‘Six of the Best’ choirs at St Mary’s Church, Banbury (28th Sept)  have been presented to the benefitting charities:

Many thanks to all those who organised, took part in or supported the concert. 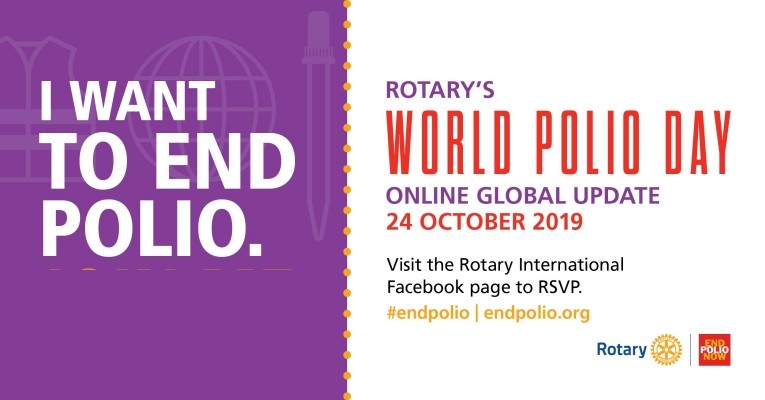 Poliomyelitis, or polio, is a paralyzing and potentially fatal disease that still threatens children in some parts of the world. Poliovirus invades the nervous system and can cause total paralysis in hours. It can strike people of any age but mainly affects children under five. Polio can be prevented by vaccines, but it is not curable. Unlike most diseases, polio can be eradicated.

For more than 30 years, Rotary and our partners have driven the effort to eradicate polio worldwide. Our PolioPlus program was the first initiative to tackle global polio eradication by vaccinating children on a massive scale. As a core partner in the Global Polio Eradication Initiative, Rotary focuses on advocacy, fundraising, volunteer recruitment, and awareness-building.

Rotary members have contributed $1.9 billion and countless volunteer hours to protect more than 2.5 billion children in 122 countries from this paralyzing disease. Rotary’s advocacy efforts have played a role in decisions by governments to contribute more than $8 billion to the effort.

With our partners, we have reduced polio cases by 99.9 percent, from 350,000 cases in 125 countries in 1988 to just 33 cases caused by the wild virus in 2018. Only two countries continue to report cases of wild poliovirus: Afghanistan and Pakistan. The infrastructure we helped build to end polio is also being used to treat and prevent other diseases and create lasting impact in other areas of public health.

Rotary and our partners have made tremendous progress against polio, but eliminating all cases is going to take even more progress and perseverance. Afghanistan and Pakistan face unique challenges, including political insecurity, highly mobile populations, difficult terrain, and, in some instances, logistical barriers. With sufficient resources, the commitment of national governments, and innovations that improve access to remote areas, we are optimistic that we can eliminate polio.

Rotary has committed to raising $50 million per year for polio eradication. The Bill & Melinda Gates Foundation has pledged to match that 2-to-1, for a total commitment of $150 million each year. These funds provide much-needed operational support, medical workers, laboratory equipment, and educational materials. Governments, corporations, and private donors all play a crucial role in funding.

More than 1 million Rotary members have donated their time and money to eradicate polio, and every year, hundreds of member’s work with health workers to vaccinate children in countries affected by polio. Rotary members work with UNICEF and other partners to prepare and distribute informational materials for people in areas that are isolated by conflict, geography, or poverty. They also mobilize to recruit fellow volunteers, assist in transporting the vaccine, and provide other logistical support. 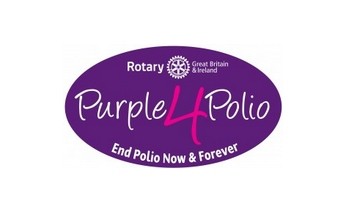 The Rotary Foundation UK has this year contributed $1,941,555 US to the Annual Fund almost half of which has gone to the fight to elimiate polio worldwide.

When disaster strikes, Rotarians around the world come together as people of action to help those in need.
To support communities in their rebuilding efforts, The Rotary Foundation is proud to announce our new Disaster Response Fund.

Donations to the Disaster Response Fund help Rotary clubs provide disaster recovery and support relief efforts where the need is greatest by funding and providing access to disaster response grants. 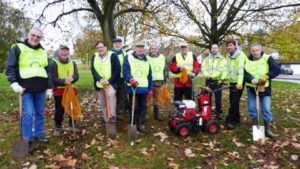 The Rotary Club of Banbury planting Crocus Corms around Banbury to bloom next spring as part of the End Polio Now campaign.

Planting this autumn will bring the total number of ruby giant crocus corms planted to over 100,000 in the past five years.

Rotary Clubs across the world have been raising awareness and funds since 1985 to make polio the second disease to be totally eradicated from the world. (Smallpox was the first.) Both of our local Rotary Clubs (Banbury and Cherwell) have been actively promoting the cause in recent years.

Local schools – primary, secondary and special – have formed a partnership with Rotary to carpet Banbury with drifts of purple crocuses and stage concerts each spring to celebrate the new year’s growth and raise funds tor vaccinations.

Over the past five years the local Rotary Club Crocus Projects Partnership involved 43 schools. Planting this autumn will bring the total number of ruby giant crocus corms planted to over 100,000. Since the concerts began in 2014, the local partnership has raised sufficient funds to immunise a third of a million children.

Both Cherwell District and Banbury Town Council have supported the schools and Rotary in this local contribution to the worldwide effort. Local churches, businesses, community groups and individuals have backed the events and a certificate to commemorate the achievements of the past five years was sent to all involved during summer and autumn this year.

The purple lighting of Banbury Town Hall will celebrate the whole community’s participation and commitment to continue the battle until the disease is finally defeated.

One extension of the local crocus concerts initiative in the coming year is a challenge to local adult choirs to match the efforts of primary school and secondary school choirs by staging concerts next spring. “We’ve had a very positive initial response from local choirs to our invitation,” commented Ian Rodrick, one of the organisers. “The secondary schools concerts will again take place in March – with proceeds shared between Polio Eradication and Helen and Douglas House Hospice. We’re still seeking a date for our adult choirs event – so watch this space!” 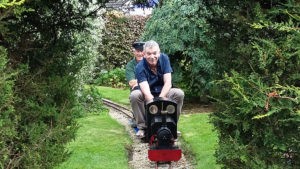 The sun shone on Stephen’s Summer Steaming Sunday last. A BBQ, train rides, tennis or croquet all helped to make the afternoon a special time for our members, families and friends. Even President Alan was entrusted with being the train driver, which he did with much aplomb.

As well as a fantastic social afternoon, the event raised over £500 for Rotary Foundation.

Having fun and helping others is truly a Rotary activity.