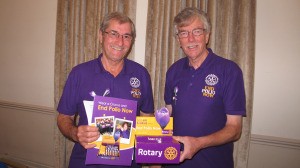 Rotary-Schools Partnership enables one child per Banburian to be immunised!

Last year Banburyshire secondary schools joined together with the Rotary Club of Banbury in a successful collaborative citizenship project which gave young people aged 11-18 in all nine local secondary schools the opportunity to play a part in addressing a world problem.

Following awareness-raising assemblies about Rotary’s End Polio Campaign, publicity on school communities’ websites and the planting of 500 crocus bulbs (symbol of the End Polio Now Campaign) on each school site, music teachers from each school worked together with talented students to perform fundraising “Crocus Concerts” at St Mary’s Church.

The 2013/2014 project succeeded beyond expectations. Local MP, Sir Tony Baldry raised the success of the project in Parliament and Minister of State for Schools David Laws offered his congratulations, stressing the positive impact on pupils and the community of projects like this.

£5000 (£1 per bulb planted) was sent to Rotary International and this amount was trebled by the Bill and Melinda Gates Foundation, enabling some 45,000 children to be immunised. By contributing £1 per crocus planted, the project had enabled one child per Banburian to be immunised!

Both the Rotary Club and Schools were keen to continue for another year. Sanctuary Housing, Banbury Charities, Cherwell District Council and Banbury Town Council have also agreed to support the second year of what may now become a five-year project. (In 2013, the World Health Organisation and its partners set a target date of 2018 for the eradication of Polio.) 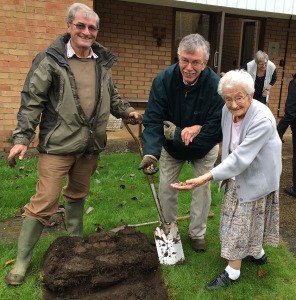 A 103-year-old Sanctuary Housing Resident helps Project Co-ordinators Harry Matthews and Fred Riches plant what they think were the 6290th to the 6300th bulbs! 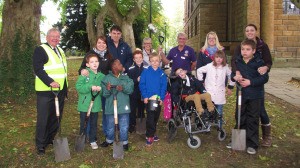 The two “Crocus Concerts” this year will be held in St Mary’s Church Horsefair on Thursday 5th and Tuesday 10th March, both beginning at 7.15pm. The 6500 additional crocus bulbs planted by students and Rotarians on school sites, in Princess Diana Park, Bridge Street Park, at Sanctuary Housing’s Retirement Living Schemes and in St Mary’s Churchyard will hopefully be in bloom. The fundraising target is again £1 per crocus planted.