(with kind permission of the Headmistress, Wendy Griffiths).

Sir Charles Pollard has been an eminent figure in policing, both nationally and internationally, and still works in the Justice system today.  Retiring in 2002 from Thames Valley Police, the largest non-metropolitan police force in the country, he had earlier progressed through the middle police ranks in London and Sussex during one of the most turbulent periods of recent history, during which time he was personally involved in many of the key policing events:.

Sir Charles began his career at the age of 19 in 1964 as a constable in the Metropolitan Police and was selected for the ‘fast-track promotion course’ at Bramshill Police College. From there he took an LLB at the University of Bristol. Through the 1970s and 1980s he pursued an eventful and successful policing career in London and Sussex and in 1991 was appointed Chief Constable of Thames Valley Police, covering 3 counties with a population of over 2.5 million.

The talk will include, among other things, his personal experiences of the policing of public disorder, crime and terrorism.  We look forward to welcoming Rotarians, local Parishioners and the General Public. 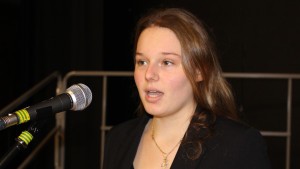 Mary Eckert, runner-up in the Banbury Young Musician senior singing section went one better in the District Finals last Saturday, winning the competition and securing a place in the forthcoming regional finals to be held at the end of March.
The Tudor Hall student impressed the judges with her virtuosity by singing “Vedrai Carino” by Mozart, “Somewhere” from Leonard Bernstein’s West Side Story (the piece she sang at one of this month’s Purple4Polio Concerts at St Mary’s Church Banbury) and “Per La Gloria D’Adorarvi” by Giovanni Bononcini.