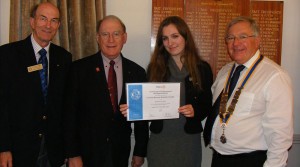 Our Speaker on Friday 26th September was Lucinda Bourne Swinton Hunter, who lives in Willington, near Shipston-on-Stour.  She is well known to our Club having been a winner of our own Young Musician competition.

In April 2013 whilst completing her “A” levels in the final year at Tudor Hall School, Lucinda applied to take part in the Rotary District 1090 New Generation Exchange Programme. She gave an enthusiastic “Snap shot” presentation accompanied by pictures of her home life and her travels during the Exchange tour.

On the 3rd January 2014, after much emailing, planning and briefings by Rotarians, she was flying across the Atlantic to Auburn, New York State, America.

During the next 2 months in the United States, Lucinda really got to grips with the American culture and way of life. She said how fortunate she was to stay with two lovely families, the Ferros and the Butlers, and attending Auburn Rotary Club every week really made her feel part of the community.

The Ferros, hosting family were also owners the Reva Rollerdrome and that gave Lucinda the opportunity to go rollerskating almost every day, when free time permitted. Fine for the first week or so and by which time she became quite proficient, meaning she could skate backwards!  Then on a fateful evening disaster struck!  She endured a rather nasty fall managing to break the left wrist. In her own words:

“and it wasn’t pretty. I’d like to think I’m fairly “manly” when it comes to pain and I managed to last the first 10 minutes tear free. And then I saw that an apple sized lump was growing out of my wrist. So I now get to spend the next 5-8 weeks with a cast and only one hand!”

Mentioning that she had an interest in a career in the Legal profession she was introduced to Law – American style. She was able to shadow her hosts in the local Drug Court, Family Courts and even had the opportunity to read through cases and sit in on meetings.  Lucinda became very much aware of the problems with drugs and alcohol abuse and was impressed by the way some people managed to turn their lives around by taking advantage of the help given them.

Lucinda also managed time to make some visits, notably to Niagara Aquarium and Niagara Falls. She also went up the Tower of the Town Clock with the timekeeper and was given the opportunity to wind it up.

Like every other Tuesday Lucinda went to the Lunchtime Rotary Club meeting, where they always had a guest speaker. On one particular occasion Lucinda was given the floor to speak.

Her time had arrived and she gave a presentation, showing a multitude of pictures of her home, Stratford-Upon-Avon, the family/dog, classic English things, the Banbury Rotary Club etc. They looked intrigued and she really enjoyed herself.

The last rotary meeting was quite surreal.

“Nobody could quite believe I had spent 7 weeks in America; it felt like a few days! I gave a short “goodbye” speech (and when I say short, I mean my version of short i.e. a good 5-10 minutes!?) and just said some “thank-yous”. I handed over the District 1090 badges (Banbury District) and received a very bright orange banner of the Auburn Rotary. I was also given a number of small gifts for me… A mug with pictures of all the places I had worked, some postcards of the Finger Lakes in different seasons, a beautiful navy scarf with the Rotary symbol on it and a book of Auburn in the last century.

Whilst I was very very grateful for the generosity of the gifts, as I received more and more, I was becoming more and more concerned about the space (or lack thereof) in my suitcase.

A lasting memory is the 100 “Oh My God you’re English” when meeting people for the first time.

I got so much out of the Rotary Exchange.

Many thanks to the wonderful Rotary clubs of New York State and the Rotary Club of Banbury for doing so much to make this exchange happen; I could not be more excited or grateful!

After her presentation Lucinda was presented with Certificate of Achievement and Appreciation.

Following the meeting Lucinda travelled by road to Durham University for “freshers week” before taking up a place where she will be studying for the next three years…. 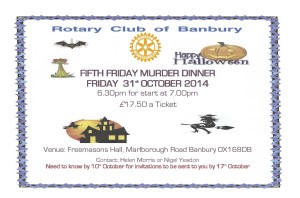 Want to celebrate Halloween? Our next fifth Friday dinner is on Friday 31st October and we are planning a Murder Intrigue Dinner Party.

The ticket price at £17.50 includes, the game, Halloween theme and a three course meal by Pink Peppercorn Caterers. A pay bar will be available.

Tickets are limited in number to a total of 64, applications to Helen Morris or Nigel Yeadon by email or add your details to the board at a Friday Club  lunch meeting over the next four weeks.