After a career as an English teacher and latterly as Head of English, Andrew Whiffin turned to a career as a “supportive Actor”, or as the rest of us would call it, an extra in film and TV.

He had trodden the boards in some good Am Drams including the Banbury Cross Players and more recently with professional theatre companies including the Riverside Players.

He explained that he signed on with a number of agencies (not just one) and waited for the offers to come in, which they fairly rapidly did as extras are always in demand.

One  attraction seemed to be the food – usually, a hearty breakfast – before commencing filming.

His appearances in films have included Johnny English Returns in which he had a line to speak (this merits an increased fee!)

He was also a member of parliament in the recent film “The Darkest Hour”, which he described as being extremely moving as the extras sat and listened to some of Churchill’s greatest speeches re-enacted by Gary Oldman.

Andrew regaled us with fascinating stories about how they make rain on set, and how they give the illusion of glass shattering.

In summary, not a career to make a fortune out of but very good fun meeting big stars of the stage and screen, and making some useful pocket money along the way 🙂 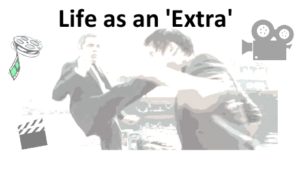