The West End comes to Banbury 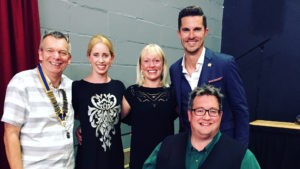 Last Saturday, to celebrate the start of a new Rotary year, 200 people packed the theatre at Tudor Hall School, and witnessed a “West End” concert. Simon Adkins (originally from Banbury and currently the resident choreographer of 42nd St in the West End), Alison Dormer & Clare Rickard accompanied by Rob Cousins performed a wide and varied range of songs from the Musicals, many of which the three have performed in during their time as Musical Theatre professionals.

Newly installed President of Banbury Rotary Club, Alan Wolstencroft, who was instrumental (pardon the pun) in setting the concert up stole a line from Jersey Boys (Simon was in the original West End cast) and said “Oh What a Night”!

Alan said “Rotary’s theme this year is “Rotary – Making A Difference”. The concert was a great way to start my year as President and I owe an immense debt of gratitude to the four professionals for putting on such a great show, and giving freely of their time, and I must also acknowledge the wonderful support we received from Tudor Hall School and the local businesses who donated items for the raffle and auction”.